A British soldier and an American adventurer test the borders of desire. 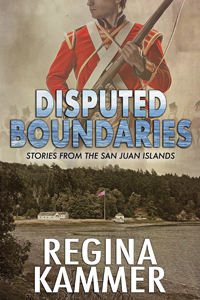 An international border dispute with no battles or skirmishes? The occupation of San Juan Island was proving to be Lieutenant Braxton Thorne’s most uneventful assignment as a Royal Marine. Which meant plenty of time to fool around with his fiancée Tilda.

American adventurer Gideon Roberts was just passing through San Juan Island on his way to his next job – and his next guy. He could stay, work on a farm, but why? A free spirit craved new experiences, new places, new men.

A chance encounter unleashes unfamiliar desires. Braxton has never been with a man. Gideon has never wanted to be with just one man. Now they find themselves in a war over the boundaries of their hearts.

Disputed Boundaries takes place on San Juan Island in 1869, during the Pig War — the final conflict between the United States and Great Britain, a bloodless standoff over the boundary between Washington Territory and British Columbia. The story is one of my Stories from the San Juan Islands.

“This was definitely an interesting read with the attraction between Tilda and Braxton and Braxton and Gideon. There were some twists I definitely didn’t see coming and the read was good!” — Rebecca A, review of Naughty Flames, 4 stars on Amazon!

Read an older excerpt on the Naughty Literati website.

Naughty Flames: Eleven Fiery Romances
Published by The Naughty Literati, 2016.
Sadly the paperback and ebook editions of Naughty Flames are no longer available. But check your bookshelves and ereaders to see if you already own it!

More Stories from the San Juan Islands from Regina