On a cold winter’s night in 1778, two patriot soldiers recall their first sensual encounter and ponder their future together with the women they love. 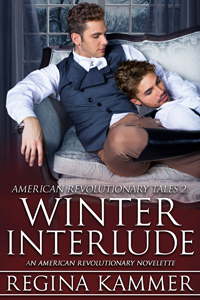 On a cold winter’s night in 1778, two patriot soldiers recall their first sensual encounter and ponder their future together with the women they love.

Winter’s icy weather is not the only chill to descend upon New York’s Fort Revolution in January of 1778. Discontent hangs heavy in the air between Lieutenant Patrick Hamilton and Captain Samuel Taylor during an evening’s respite from America’s war for independence.

Reminiscing brings a realization of their emotional and physical connection to each other. Will memories be enough to rouse reconciliation?

Winter Interlude can be read as a stand-alone.

“Regina Kammer never disappoints. Reading her stories makes one cover their mouth with an “oh my” while simultaneously pleading “yes, more!” These stories take the reader back in time when men were forbidden the touch of another, which made stolen moments all the more riveting, if Kammer is to be believed. And believe her I did. Right to the very last thrust!” — MetalMom on Amazon.

“If you like MM fiction and/or historical fiction, I highly recommend you give Winter Interlude a read. It’s steamy, surprisingly well-drawn and well-developed, and Patrick and Samuel are a fabulous couple.” — valeen on Amazon; also posted on the Live Through Books Blog!

“Sam and Pat are fighting for America’s freedom, and for themselves. This is a M/M fast paced romance that is HOT!” — Cathy Doyle on Goodreads ; also posted on Amazon.

“The characters are strong and well developed and the author does a great job painting the scenery of the day.” — Brenda on Amazon.

“This very short story is well written and worth reading.” — Jill on Goodreads ; also posted on iBooks.

Review of the Bonus story: “The role play with the man pretending to be a woman courted by General Washington was pretty hot. I would love to see more like this.” — alias11 on Amazon.

Inspiration for Winter Interlude and “On the Eighteenth of January, ’78; or, A Night At Valley Forge”

Blog post on what inspired me to write “On the Eighteenth of January, ’78; or, A Night At Valley Forge”, a bonus story with Winter Interlude: An American Revolutionary Novelette.