A Parthian princess searching for the lost throne of her kingdom engages the services of a palace eunuch and discovers a treasure far more precious. 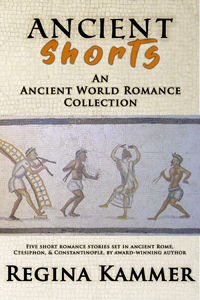 “An Unexpected Discovery” by Regina Kammer

In 116 CE, during the Roman invasion of Parthia, Roedogune, a Parthian princess, was taken captive along with the sella regia, the famed throne of her kingdom. She was held captive in Rome for twelve years, released by the Emperor Hadrian. Upon her return home to Ctesiphon, she and Arashis, a palace eunuch, search for the sella regia using her network of spies. Over the years, as the search continues, Roedogune and Arashis discover a treasure far more precious.

Inspiration for “An Unexpected Discovery”

Read more about Roedogune, the throne, and Parthia on my blog!

Reviews for “An Unexpected Discovery”

Naughty Getaways: Eleven Sultry Stories
Produced and published by The Naughty Literati, 2017.
Sadly the paperback and ebook editions of Naughty Getaways are no longer available. But check your bookshelves and ereaders to see if you already own it!

1 thought on “An Unexpected Discovery”