Hi everyone,
Today I’m hosting a blog tour stop on my blog. The tour is sponsored by Reviews By Crystal. Keep reading to the end where there is a Rafflecopter giveaway!
-Regina

The Duchess and the Highwayman

Beverley is giving away a $10 Amazon Gift Certificate and an ebook The Mysterious Governess to randomly drawn winners via Rafflecopter during the tour. The Rafflecopter link is at the end of this post. Remember you may increase your chances of winning by visiting the other tour stops. You may find those locations here. 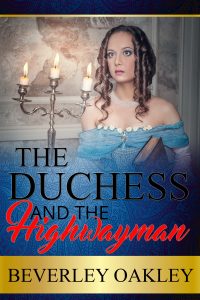 A duchess disguised as a lady’s maid; a gentleman parading as a highwayman.
She’s on the run from a murderer, he’s in pursuit of one…

In a remote Norfolk manor, Phoebe, Lady Cavanaugh is wrongfully accused by her servants of her brutal husband’s murder.

There’s little sympathy in the district for the duchess who’s taken a lover and made clear she despised her husband. The local magistrate has also vowed revenge since Lady Cavanaugh rebuffed his advances.

When Phoebe is discovered in the forest wearing only a chemise stained with the blood of her murdered husband, she persuades the noble ‘highwayman’ who rescues her that she is Lady Cavanaugh’s maidservant.

Hugh Redding has his own reasons for hunting down the man who would have Phoebe tried and hanged for murder. He plans to turn ‘the maidservant with aspirations above her station’ into the ‘lady’ who might testify against the very villain who would see Phoebe dead.

But despite the fierce attraction between Phoebe and the ‘highwayman’, Phoebe is not in a position to admit she’s the ‘murderous duchess’ hunted across the land.

Seizing an opportunity to strike at the social and financial standing of the man who has profited by her distress, Phoebe is drawn into a dangerous intrigue.

But when disaster strikes, she fears Hugh will lack the sympathy or understanding of her unusual predicament to even want to save her a second time.

It was an evening like any other: dull with a hint of menace and tension so thick Phoebe imagined slicing a neat hole in it and disappearing magically into a new life.
Any would do.
The company had retired to the dim, close drawing room, gentlemen included, following a gluttonous dinner. By the fireplace Phoebe worked at her embroidery, glad to be ignored though she knew that wouldn’t last for long.
The reprieve was even briefer than she’d anticipated. Brutus exhaled on a shuddering snore truncated by a yelp as he chased rabbits in his dreams; this caused James the footman, who was stooping over Ulrick in the act of offering his master a drink, to jump in fright and deposit a snifter of brandy upon her husband’s waistcoat. Not that it would concern Ulrick who was snoring more loudly than Brutus and whose waistcoat was already stained with drool.
The footman cast the mistress a sideways glance as he unwound his lordship’s stock and dabbed at the sticky mess but Phoebe held her tongue and made do with a dispassionate look. She’d never liked James. She was certain he’d conspired with Ulrick on more than a few occasions to put her on the back foot and to tarnish her name below stairs. Despite her obvious disdain, she was afraid of the power he wielded.
“That will be all, James.” She rose with a dismissive wave and the rustle of silken skirts. “I’ll attend to my husband. Please see Mr Barnaby and Sir Roderick out.”
Sir Roderick, that most unwelcome of neighbours, appeared before her, bony and wraithlike; malevolent as ever. “I believe your dog that needs more attention than Lord Cavanaugh.” His thin mouth turned up in a parody of amusement as he wafted a fastidious hand about his nose, indicating Brutus’s greater guilt than his master’s snoring.
Phoebe offered Sir Roderick a cold smile. On the other side of the room Ulrick’s two other guests conversed in low voices by the window.
She inclined her head as she ignored his attempt at levity. “Good night, Sir Roderick.”
Sir Roderick straightened his spare, weedy frame, which she saw trembled with supressed outrage at being so summarily dismissed by the lady of the house.

Phoebe refused to turn away from his challenging gaze. Sir Roderick was another who couldn’t wait until the doors of Blinley Manor were closed against her the moment Ulrick breathed his last. She’d offended his honour, having bitten his lip and kneed him in the groin six months before when he’d accosted her in a dimly lit corridor and suggested in lewd terms how he might assist in the creation of an heir for the already ailing Ulrick. An heir that would ensure Phoebe kept a roof over her head.

Beverley Oakley was seventeen when she bundled up her first her 500+ page romance and sent it to a publisher. Unfortunately drowning her heroine on the last page was apparently not in line with the expectations of romance readers so Beverley became a journalist.
Twenty-six years later Beverley was delighted to receive her first publishing contract from Robert Hale (UK) for a romance in which she ensured her heroine was saved from drowning in the icy North Sea.
Since 2009 Beverley has written more than thirteen historical romances, mostly set in England during the early nineteenth century. Mystery, intrigue and adventure spill from their pages and if she can pull off a thrilling race to save someone’s honour – or a worthy damsel from the noose – it’s time to celebrate with a good single malt Scotch.
Beverley lives with her husband, two daughters and a Rhodesian Ridgeback puppy the size of a pony opposite a picturesque nineteenth century lunatic asylum. She also writes Africa-set adventure-filled romances tarring handsome bush pilot heroes, and historical romances with less steam and more sexual tension, as Beverley Eikli.
You can get in contact with Beverley at:
website | Facebook | Pinterest | Twitter | Goodreads

About the Host: Regina Kammer

Regina Kammer is a librarian, an art historian, and an award-nominated, best-selling, multi-published writer of erotica and historical erotic romance. Her short stories and novels make history sexier, whether the era is Roman, Byzantine, Viking, American Revolution, or Victorian. She’s even sexed up contemporary settings, Steampunk, and Greco-Roman mythology. She has been published by Cleis Press, Go Deeper Press, Ellora’s Cave, House of Erotica, Story Ink, The Naughty Literati, and her own imprint, Viridium Press. She began writing historical fiction with romantic elements during National Novel Writing Month 2006, switching to erotica when all her characters suddenly demanded to have sex.
Click here for social media and other authorial links for Regina!
Find out more about what Regina writes by clicking here!

4 thoughts on “Blog Tour: The Duchess and the Highwayman By Beverley Oakley”