Then, on release day October 29th, as autumn descends, bringing with it cool and chilly weather, curl up with your ereader and warm up with these hot stories!

I am especially pleased to publish “An Unexpected Discovery” and “The Eunuch” together for the first time!

Hot as Hades
Mythological
After living in Hell for four months, Persephone returns home to the mortal realm. But can home truly be home without the man she loves? “Hot As Hades” is a mythological, light paranormal romantic comedy based on the Persephone myth.

The Promise of Memory
100 CE
A Roman slave finds freedom in her fantasies of a knight in Trajan’s imperial guard — a warrior who evokes memories of a long lost love.

An Unexpected Discovery
130-138 CE
A Parthian princess searching for the lost throne of her kingdom engages the services of a palace eunuch and discovers a treasure far more precious.

The Eunuch
138 CE
The desire to submit is timeless… In Ancient Parthia, a palace eunuch gives his body in service to a princess. But who is really in control?

Protecting Her
860 CE
A Byzantine noblewoman seeking refuge in a monastery loses her heart to an invader when Constantinople is sacked by the Rus.

Five tales of timeless passion to heat up those chilly nights!
Pre-order now for only 99¢!
But hurry! Price goes up on release day! 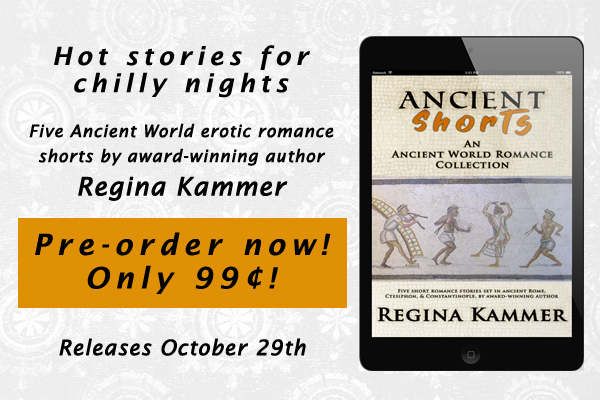 Want to review Ancient Shorts? Sign up via Booksprout!