It’s October and once again time for NaNoPrep. “Preptober” is the time when authors all over the world prepare their National Novel Writing Month novel. This year my novel is called The Sooper Sekrit Steampunk Story. Yes, it will be Steampunk! Yes, there will be romance! But, I only have sort of an idea of what’s going to happen!

Why is my project super secret (or Sooper Sekrit)? For a couple of reasons really.

1) I don’t have any inkling of a title. One might come to mind once I’ve started writing, but I got nothing right now.

2) Once I get my rights back to “One Cheek Or Two?”, I plan to do a relaunch of my Ockham Steam-Works Laboratory Chronicles series. However, I have not yet finished all of the stories in that series (hmmm…perhaps that project should have been my 2021 NaNoWriMo effort?). So I won’t even be thinking about releasing any new Steampunk until after Ockham is completed.

I can say this about the Sooper Sekrit setting and universe:

1) The story takes place in Birmingham, England. (Ockham Steam-Works Laboratory Chronicles is set in Newcastle.)
Fun fact #1: Did you know the city of Birmingham has more miles of canals than Venice, Italy? The whole Birmingham Canal Navigations system incorporates 100 miles of canals.
Fun fact #2: I passed through Birmingham the first time in 1982. I had to walk from New Street railway station to Moor Street station. Two years later, I attended a year abroad at the University of Birmingham. I never saw any of the canals when I was there. My understanding is that the canal system was sort of in disuse at that time, but was refurbished and reinvigorated later to attract tourism.
Fun Fact #3: Canals feature in my Sooper Sekrit story!

2) The story is set in an alternate 1852, after a tragic event in 1851 changes the world. The aesthetic is going to be less leather corsets as outerwear, and more everyone wears black or the colors of Victorian mourning, e.g., black, gray, white, lilac, lavender.

This will be a male-female (m-f) romance. Our hero is Felix, a railway and canal engineer in his late twenties. Our heroine Miranda is in her early twenties. She secretly works in her father’s clock shop making clock-works. Secretly, because women aren’t allowed to work in this alternate dystopia.

Of course I made a fake NaNoWriMo cover! 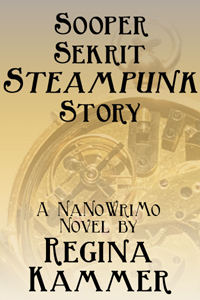 Follow me on social media for updates on my Sooper Sekrit project! And if you are a NaNoWriMo participant, you can follow my progress on my project page.

Oh, I almost forgot! I have a theme song this year. Time and Tide by Basia (1987) is about being in love with someone who is not available — yet. Also, time and tide … clocks and canals. So perfect!