This re-post of an interview I did with romance author Betty Bolte is the fourth in a series of blog interviews I’ve done over the years. The first post explains my purpose.

Today’s post is from a 2020 interview I did for Betty Bolte’s blog to promote Resistance. Betty is one of the authors who participated in the Common Elements Romance Project, and she generously offered space on her popular blog for her colleagues.

Today I’m welcoming a fellow Common Elements Romance Project author, Regina Kammer. I’ll let Regina explain more but let’s look at her bio before we get to the meat of the interview.

When did you become a writer?
Like many bookish young adults, I wrote stories, plays, and epic poetry in my teens. I put all that aside in college and graduate school, probably because I was writing so many research papers. I got the bug again decades later, in 2006, when I read about National Novel Writing Month in my college alumni magazine.

What prompted you to start writing?
In 2005, I had a super long commute to my job via transit, so I was reading tons of books. I had just finished reading a book I thought was absolutely terrible – the history was wrong, the romance was flat – and I audaciously thought “I could totally write a better novel!”

So, after reading about National Novel Writing Month, I started to do a bunch of historical research in preparation for November 2006, with the idea in mind that I would write that historical novel.

What type of writing did you start with?
Teenage me started writing historical fiction inspired by the books I had read. Somewhere in my files I have notebooks with stories based on Caddie Woodlawn and 1940s-set Ellery Queen mysteries.

Jump ahead to 2006, and adult me did a very similar thing. I had read all of Jane Austen’s works, in order, and was greatly intrigued by the concept of entailed property in Pride and Prejudice. I started researching British property law and decided I would write historical fiction with romantic elements set during the passage of the Married Women’s Property Act of 1882.

What do you most enjoy writing? Why?
I prefer to write historical romance, although I have also written contemporary romance. As a historian myself, I enjoy research, and I love how what we think we know about history is being challenged. I also like the speculative nature of historical writing, using history as the spark to set a plot in motion.

What do you wish you knew before you started writing/publishing?
I come from an academic background of writing art historical research papers and theses. That sort of writing is very different from fiction, and usually includes a lot of background information. So, of course, my early fiction efforts (unpublished) were heavy with backstory!

Other technical aspects of fiction writing I did not know about were point-of-view, especially deep third pov. So, again, early works were filled with head-hopping and filter words.

What inspired you to write the book you’re sharing with us today?
I am passionate about historical and environmental preservation, and we’re living in a time when so much of our natural landscape is threatened. I set Resistance: A Common Elements Romance in a fictional national historic park where both the park’s history and its resources are threatened.

I had been working on a story for a boxed set with the requirements that it be a contemporary romance involving a military or ex-military hero. When the boxed set project was put on hold, I still had a half-finished book. I was thinking about pitching it to publishers when I heard about the Common Elements Romance Project. I joined the Project and edited my story to include the five common elements.

Resistance has a very, very contemporary story line. I wrote it almost in real time in 2018. Every day brought changes to the political landscape and my story reflects much of that.

Even though Resistance is a contemporary romance, the story incorporates a lot of history. The hero, Kace Jaager, was an archaeological field commander in Iraq during Operation Desert Storm tasked with preserving cuneiform tablets. The fictional national park, Fort America, has a unique and very American history – I won’t give that away.

Resistance is my final contemporary romance. I have too many historical romances waiting to be finished! 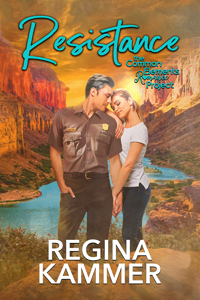 Kace Jaager, former Army archaeologist, now Superintendent of Fort America National Park, has a duty to preserve and protect the natural beauty and cultural heritage of the United States.

Sparks ignite as ideologies collide. Yet uncontrollable attraction compels a truce in bed. Opposites may attract, but can they put politics aside to form a more perfect union?

Resistance is an enemies-to-lovers contemporary seasoned romance with a 53-year-old silver fox hero and a 42-year-old heroine in her prime. The short novel is part of the Common Elements Romance Project, where over seventy romance authors have come together to write stories with five things in common. Stories are not connected in any way, except for having five elements: a lightning storm, lost keys, a haunted house, a stack of thick books, and a person named Max.

He studied the framed photo in his hand, a gift from a reporter friend. A casual action shot of him in Iraq dressed in camouflage—shirt unbuttoned, sleeves rolled up—examining an artifact, his hair—back when it was brown—windswept, desert sandstone hills and army jeeps in the background. He looked a bit like a romantic archaeological adventurer in an action flick.

The kind of guy chicks would swoon over.

He placed the photo prominently on his desk. All was fair in love and war, and this was going to be an all-out war. If he had to use a sexual stratagem, so be it. At the very least, an image of him in his army days might soften the heart of a conservative businesswoman.

A quick rap on the door precipitated Becky’s entering. “Kace—”

Ms. Danes pushed passed, her exotic perfume flaring his nostrils. He swept his reading glasses into the top drawer of his desk.

“I’m here on official business. Mr. Jaager is expecting me.”

Kace waved at Becky. “It’s all right.” He nodded when Becky motioned as to whether to close the door.

Ms. Danes plopped her purse on an empty sliver of desk and rummaged in its depths. She produced a thumb drive. “Everything’s here. Just plug and play.”
He grabbed it, his fingers sliding along her slick lacquered nails, a frisson of interest nagging his crotch.

Sounds like quite a conflict to overcome, and one that is very timely, so that should be a great story! Thanks for sharing it today, Regina.