I have a title. I have a (tentative) blurb. I have a fake cover.

And it’s only October 29th.

Welcome to #NaNoPrep2016 where I’ve pulled together what I’m going to do for National Novel Writing Month at the last minute.

But, quite out of the blue, Ellora’s Cave contacted me to say they are returning rights to Where Destiny Plays as of December 31, 2016, and in our email exchanges, made clear that my characters and my world are my own.

So, I am taking the opportunity to write Book 4 as I begin the process of republishing Book 3.

October was filled with suddenly having to deal with republishing Where Destiny Plays, production for Naughty Flames the winter anthology from the Naughty Literati, final edits to The Westerman Affair before I submitted it to an agent, a ten-day road trip, and rehearsals for the Nutcracker ballet.

Oh, and figuring out everything about Book 4 of The Harwell Heirs series. Including a title.

Ladies and gentlemen, I present to you A Noble Deceit (Harwell Heirs Book 4), my NaNoWriMo 2016 novel: 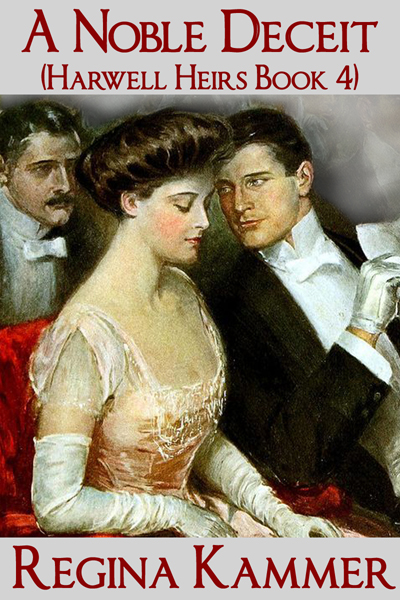 As the son of the Duke of Amesbury, Percival Wood, the Marquess of Norrington, is required to marry. But Norrington wants nothing to do with women. He loves men. And he’d rather settle down with one particular man, Bertram Atherley, the Viscount Ravensburgh.

Still, Norrington’s father will expect grandchildren, notably a grandson to carry on the dukedom.

Norrington and Ravensburgh have a special relationship with Penelope. She accepts their forbidden love and makes herself available when they need a woman for appearances’ sake. Besides, she has secrets of her own. She enjoys sex—sometimes with strangers. Utterly unacceptable behavior for a young woman of the Victorian era.

Surely Norrington could handle being married to a friend? Possibly even stomach sleeping with her?

But Penelope’s parentage is unknown, and the Duke would never sanction such a marriage. Norrington must find a way to marry a noble-born woman and have her produce his heir.

Or make it appear as such.

Yes, back are hot-blooded Penelope Hardcastle from The Pleasure Device and Where Destiny Plays, plus Percy and Bertie who both had brief appearances in those two books. If you recall, Bertie is the cousin of Nicholas, the hero of The Pleasure Device.

There will be sex! Male-male, bisexual male-female, female-female sex! Sexual discovery! Committed sex! Sleeping together with no sex!

Seriously, this is going to be good.