I’m used to writing about characters and situations and places that actually existed or could have possibly existed (I mean, c’mon, it is fiction). I’m definitely not used to writing stories that take place in some futuristic pseudo-past where women wear corsets — leather corsets! — on top of their clothes. Besides I know absolutely nothing about science or mechanics (except when I was young and owned a VW Bug).

What’s the old adage? “Write what you know”? When you get right down to it, what on Earth does a librarian-art historian really know about erotica, much less Steampunk erotica?

But when I saw the call for submissions for Valves & Vixens: Steampunk Erotica, I was curiously intrigued. I realized I could totally write that.

But it was a personal link to a peculiar machine that was the inspiration for my submission for Valves & Vixens.

My father-in-law (who shall remain nameless; in fact, I’m keeping all the details purposely vague) designed and built a “fucking machine” in the 1970s. The mechanical components were housed in a clear plastic rectangular box so one could see the machine at work when it was being used for its intended purpose. It was used in pornographic films, and, as the lore goes, when not in use was stored in the family garage covered by a blanket. About a decade or so ago, it was sold to a (somewhat famous) pornographic filmmaker for his collection of such devices.

I’ve always wanted to use this curious contraption in a story. But a contemporary setting would have made it seem too porny, and it’s totally not appropriate for a historical story. But once I saw the call for submissions for a Steampunk anthology, my brain had a revelation: make it steam-powered and put it in a stylized late Victorian setting!

“One Cheek or Two?” was my very first attempt at Steampunk and it was super fun to write. So much so, I’ve decided to continue with the genre, and with the characters I’ve created. Delia Bennett, Professor Edward Ockham, and Sebastian Broadchurch will be appearing in a new story coming out in February 2015. More on that in Part 2. 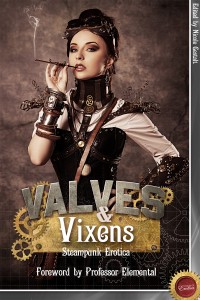