After living in Hell for four months, Persephone returns home to the mortal realm. But can home truly be home without the man she loves?

“Hot As Hades” has been republished in Ancient Shorts: An Ancient World Romance Collection 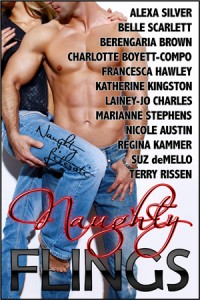 Stay The Night by Alexa Silver
Blood Mates: How To Blackmail A Vampire by Belle Scarlett
The Loch Ness Monster, Romeo, And Julio by Berengaria Brown
The Shadowlord’s Arrival by Charlotte Boyett-Compo
Teach Me To Dance by Francesca Hawley
Phantom Affair by Katherine Kingston
Sticky & Sweet by Lainey-Jo Charles
Buying Adam by Marianne Stephens
My Kind Of Lover by Nicole Austin
Hot As Hades by Regina Kammer
Spring Training by Suz Demello
Blue Plate Special by Terry Rissen

“Hot As Hades” by Regina Kammer

This re-imagining of the Persephone myth is Regina’s first solely paranormal short story.
After living in Hell for four months, Persephone returns home to the mortal realm. But can home truly be home without the man she loves?

Inspiration for “Hot As Hades”

Read about how Regina has re-imagined the Persephone myth more than once.

Reviews for “Hot As Hades” as it appeared in Naughty Flings

“Roman mythology reworked brings humor and realism to the story of Persephone and Hades.” — Lizabeth Tucker, Goodreads
“This was a fun story to read!” — Dana Busenbark, Amazon

Check out the Naughty Literati Bookshelf for more anthologies!