An excerpt from “Hot as Hades,” my story in Naughty Flings: Twelve Naughty Little Romps, is up today on our Naughty Literati blog.

When I was thinking about what to write for Naughty Flings, an anthology with the theme of springtime, the quintessential springtime myth came to mind, i.e., the story of Persephone. I decided to revisit this myth, but to put a new spin on it, which proved pretty easy.

Because I’d put a new spin on the story once before.

In Hadrian and Sabina: A Love Story, Hadrian and his entourage, including his beloved Antinous, journey to Eleusis, Greece, to be initiated into the Eleusinian Mysteries. No one really knows what went on during this initiation, but there has been a lot of speculation. We do know that the Mysteries had to do with the Demeter and Persephone cults, and there was a fertility rite associated with the initiation. In Hadrian and Sabina, I decided to change the original myth and emphasize the fertility component. Here’s an excerpt from Antinous’s experience of the initiation ceremony:

Demeter’s beloved daughter Persephone had been desired by Hades, god of the underworld. One day, he kidnapped the girl as she wandered through the fields of Enna, picking flowers, trusting the world around her to be good and kind and beautiful. As she struggled in the arms of her captor, she watched in horror as the ground split open and Hell was revealed. She screamed as the black carriage descended into the underworld, then watched in disbelief as the fissure in the ground above her sealed shut. She was trapped in the black, cold underworld as the wife of Hades.
Demeter looked high and low for her beautiful Persephone, her only child. She asked who had seen her daughter? Who had witnessed the disappearance? No one could answer her.
She wandered the earth for four months, fasting, tearing her hair. For those four months there was no sunshine, there was no warmth, the ground remained barren, rain poured from the heavens, snow covered the mountains, rivers iced over. Mankind was beginning to die as the goddess of fecundity and life mourned the loss of her sole progeny.
Finally, Helios, the god of the sun, revealed to Demeter that he had witnessed the despised Hades take the goddess’s precious daughter. Helios also knew the lord of the underworld had performed carnal acts upon the girl’s virgin body. Demeter demanded to speak with Hades.
“Return my daughter.” She was livid.
Hades laughed in her face. “I have made her my queen. She is compliant. She endures the bed chamber. It is quite alluring.”
This only enraged the goddess of fertility, to know her innocent daughter had been molested by the hideous lord, hated even by the other Olympian gods and goddesses.
Zeus had to intervene. Without plants to green the earth, animals to tame the land, grain to eat, wine to drink, mankind would not survive. If mankind did not survive, then there would be no offerings to the gods. The situation was untenable.
“You must return the maiden to her mother,” the god of all gods had told his despised brother Hades.
“She is a maiden no more,” said the lord of the underworld.
Zeus understood the implications. “How many times has she been in your bed?”
“Four.”
“Then she shall share your bed for only four months during each year.”
Hades knew he could not object. Besides, that meant for four months every year he could please himself with a beautiful girl who would be otherwise unsullied during the rest of the year. During the first month of her annual captivity it would be as if she were a virgin once more, tight and unused.
“I accept,” he said readily.
Demeter protested. Her daughter was an innocent who did not deserve to be in Hell for four months every year.
“He has claimed her as his wife, sister,” explained Zeus. “You know the law of the Fates.”
Demeter did know the law. She had to comply.
Persephone was led out of Hell by Hermes, the messenger god. The destroyed, beleaguered girl was pale and wan, new lines of distress in her face revealing the horrors to which she had been subjected against her will.
But when she fell into the arms of her mother, she instantly became the beautiful youthful lass she had been before being dragged into the mouth of Hell. Mankind rejoiced at the reunion. Crops grew, animals gave birth, women’s monthly courses flowed. Life had been restored, resurrected. De-meter herself bore a son, Iacchos.
Antinous knew the story by heart. He had, of course, heard it as a child, over and over again. But when he was a boy the story had been that Persephone had eaten four pomegranate seeds in Hell, and for that she had to remain queen for so many months. That she shared Hades’s bed once a month for four months had not ever occur to him. It was revelatory. After days of instruction, it had made sense that women’s bodies – their sexuality, their menses – would be tied into the story of fertility and fecundity and the beauty of mother earth.

My take on the Persephone myth in Hadrian and Sabina was scholarly and sexual. “Hot as Hades” is completely different. It’s a sexy, romantic-comedic (rom-com) romp. I hope you’ll check out Naughty Flings: Twelve Naughty Little Romps. It’s currently on pre-order at Amazon, and will be released on May 15th!

Nota Bene: I am currently re-reading Hadrian and Sabina: A Love Story in preparation for – finally – converting it to an ebook. Stay tuned! 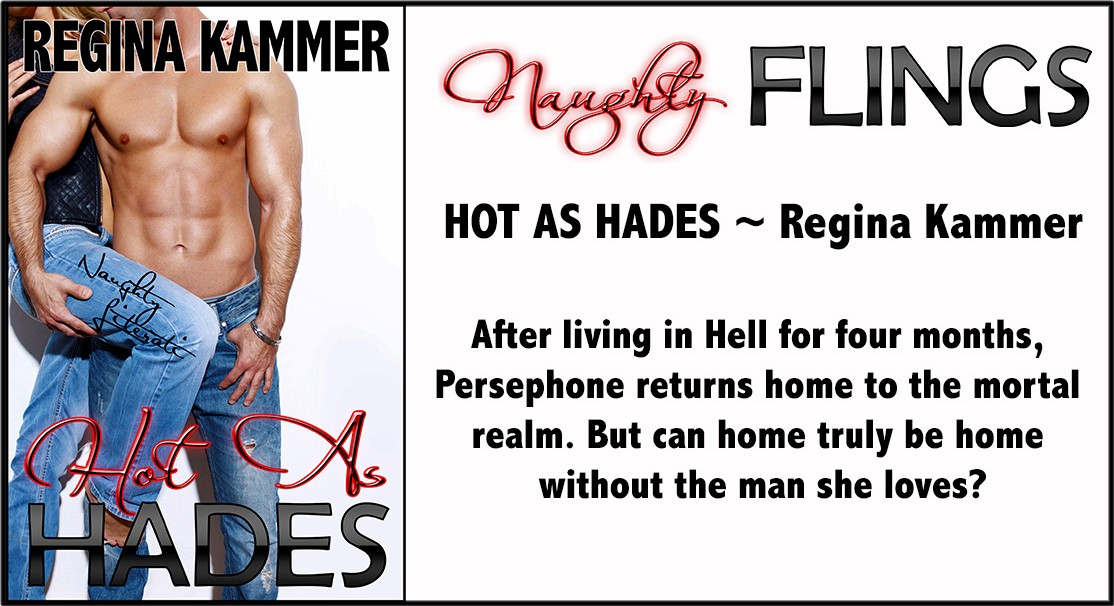 1 thought on “Rewriting the Persephone Myth”