It’s June 14th and in the United States we’re celebrating Flag Day! I have a special promotion for June (Flag Day month) and July (Independence Day month). See the end of this post!

I’ve written stories that take place in ancient Roman and Victorian England. But my favorite book I’ve written takes place in New York state and is set in 1777 during the American Revolution.

The General’s Wife: An American Revolutionary Tale is an eighteenth-century adventure that’s part erotica (sexual awakening of the heroine) and part romance (a happily-ever-after). Our heroine, Lady Clara Strathmore, encounters three heroes and one villain. Her lady’s maid encounters two heroes and the same villain plus half a dozen Hessians. Let’s just say there’s a whole lot of sexy action along with politics, intrigue, and humor.

However, the book had a problem. There was a naked lady on the cover of the 2013 edition and Amazon, the world’s foremost retailer of books and ebooks, does not like nudity on covers. So Amazon slapped an Adult Filter on the book making it very difficult for readers to find or “discover” (as the parlance goes).

I’ve discussed this at length on my blog, so won’t discuss it here. But the end result was: if I ever wanted readers to find the book, I had to change my cover. All the sexy bits had to be between the covers, not on the cover.

There was a bit of a risk involved. There is no guarantee that changing a cover will get that Adult Filter taken down. Amazon’s policies on the matter (actually all their policies on all matters) are mutable, vague, and somewhat random. I’ve heard all sorts of stories about how a glimpse of a woman’s bare back was a no-no for one author, but bound hands and a bit of butt is okay for another. And that sometimes it is the combination of the book blurb and the cover, so if your request for removal of the Adult Filter is denied, you won’t know if it is the cover or the blurb because Amazon won’t tell you.

I wanted to do this right, which meant paying for a new cover, with money I don’t have because no one is buying my book they can’t find! So I took the plunge and got a new cover. 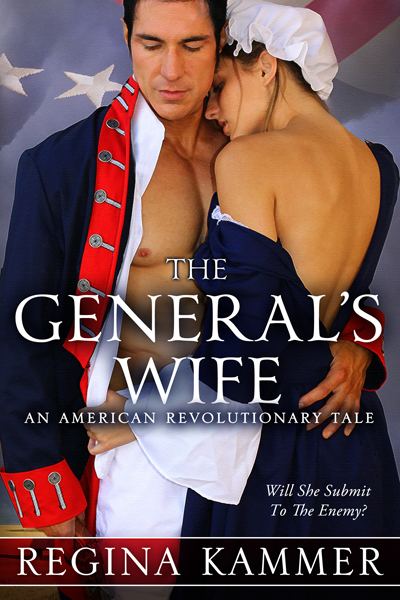 [Isn’t it gorgeous?]
I uploaded my new cover and wrote to Amazon asking them to please remove the Adult Filter. A day later I got this reply:

After further review, we have decided to remove the search restrictions so your book will now be found in our general product search results.

I squealed in glee! I was ecstatic! So much so, I’ve put the Kindle edition of The General’s Wife on sale for 99¢ because now I want everyone to read it! I’m keeping the sale going during the months of June and July.

So if you want a fun, frolicking, Revolutionary read, go get The General’s Wife! History has never been sexier.