Hi everyone! I’m over at The Naughty Literati blog today discussing “Hot as Hades”, my story in Naughty Flings. If you don’t want to go over there, the post is below!

The weird thing is that no one asks murder mystery writers if they’ve ever killed a person, or pseudo-medieval fantasy authors if they’ve quashed enemies to garner a throne, or vampire epic authors if they enjoy the taste of blood. Nope. It’s just the sex writers who get asked all the crazy questions.

Someday I’m just going to say, yes, if you’ve read it, I’ve done it, so why don’t you just go out and buy all my books, please, and then we’ll talk about time traveling back to 1777 New York and getting gang-banged by Hessians and a British general.

The truth behind writing fiction is far more interesting and fun. I’ve written about the weird experience of characters who refused to do what I wanted them to do, of characters who utterly drove a sex scene (and again), and having history spark my imagination.

As I delve more fully into unknown frontiers of writing, though, “write what you know” takes on a whole new meaning. I wanted to write Steampunk, but I know nothing about machines. Yet, I do know enough about the Victorian era to tweak it a bit. I wanted to write about Vikings, but my academic background is in the Late Roman-Early Byzantine period. Ah-ha! The Vikings paid a visit to Byzantine Constantinople. I thought about writing paranormal, and…

I seriously do not understand things like shape-shifters and vampires, and it takes a really good writer to make those things sexy to me. I swore I would never write paranormal for these reasons.

So I had already written paranormal, just not the kind of paranormal (e.g., vampires, shape-shifters) that’s really popular. It was a kind of paranormal I knew, with Greco-Roman gods and goddesses and a dream-like setting. I went back and re-read Hadrian and, lo and behold, there were other light paranormal elements, including a great four-way sex scene.

When the Naughty Literati were planning our anthology Naughty Flings with a springtime theme, I asked myself “what do I know about spring?” (because, um, you know, the whole write what you know thing). Hmmm…the end of winter’s frost brings a rejuvenation of the earth…agriculture…Demeter, the goddess of agriculture…who brings winter to the earth when her daughter Persephone is abducted by Hades…and spring arrives when Persephone is released. I’d written about all of that before, in Hadrian and Sabina. In that book I offered an alternate interpretation of the Persephone myth. And in “Hot as Hades” I offer yet another interpretation.

I had a lot of fun writing the story — the paranormal story. I hope you enjoy reading it. 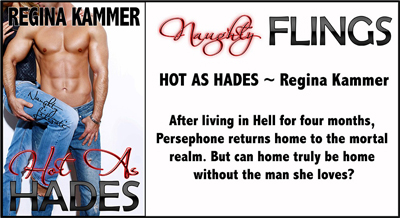