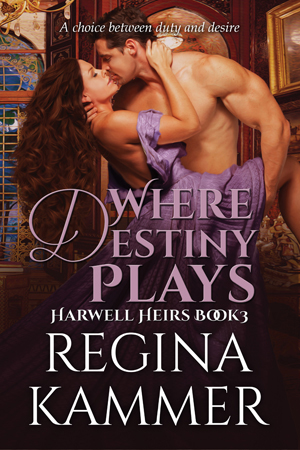 The cover designer was Dar Albert of Wicked Smart Designs, who also did the covers for the re-release of The Pleasure Device and Disobedience By Design.

And to celebrate my new re-release I’ve priced the ebook at 99¢ for a limited time! You can find the ebook edition of Where Destiny Plays at the following retailer sites:
Amazon USA
Amazon UK
Amazon Canada
Amazon Australia
Barnes & Noble/Nook Press
Inktera/PageFoundry
iTunes/iBooks
Kobo
UPDATE: Now available on Google Play!

And, for the first time ever, Where Destiny Plays is available in paperback! Buy it here:
Amazon USA
CreateSpace
Barnes & Noble

After a night of passion at Victorian England’s most notorious masquerade, Arthur Harwell knows he’s met the woman of his dreams. A wealthy viscountess with deep political connections, Lavinia is surely the perfect match for the future marquess. But tragedy has left Lavinia unable to provide Arthur with the one thing he needs: an heir. Must Arthur abandon true love to satisfy aristocratic obligations?

Ever since a tragedy twenty years ago, Arthur Harwell, the Earl of Petersham, has vowed to never fall in love again—or marry. Yet a passionate encounter with a veiled woman at a masquerade inflames his hopes, and he is determined to find her. When he discovers the stranger is Lavinia, a woman for whom he already carries a torch, he is certain his future is settled.

Widowed, wealthy, and well-connected, Lavinia, the Viscountess Foxley-Graham, has her pick of lovers, including the far too appealing Lord Petersham. Yet a disastrous affair twenty years prior left her heartbroken and wary. She fights her demons to allow herself to fall in love with Arthur.

But disaster looms anew. As heir to the Marquessate of Richmond, Arthur is required to marry—and produce an heir. Lavinia’s scandalous liaison left her with more than just sorrow—she was rendered barren. Can Arthur reconcile familial duty with the needs of the heart?

And the series blurb:

The journey to getting my rights back and republishing has been a very long and annoying one. But I love this book and this series, and I am so very thrilled to be able to offer Where Destiny Plays on my own terms!