Hi everyone! I’m over at the Naughty Literati blog today talking about the inspiration for my Naughty Escapes story. The post is copied below. Enjoy!

In my story “Window Display” in Naughty Escapes, the heroine, Laurie, an American Ph.D. student, trots off to Zurich to finish up her dissertation. Instead of the hoped-for peace and quiet, she finds distraction in a totally hot neighbor who doesn’t bother closing the curtains when he’s naked at home.

Many of my Naughty Literati co-authors chose rather exotic locations for their Naughty Vacation Getaway stories. Zurich is generally not considered an “exotic” or even “sexy” location in which to set a romance! Exotic or not, sexy or not, the story is based on a real-life event. Not my life, though. Inspiration came from an unlikely place.

I’ll go back to the beginning.

I became a National Novel Writing Month groupie in 2006 after I did my first NaNoWriMo that November. Writing a novel changed my life. Quite literally, really. I wanted to give back. At the time I lived in the San Francisco Bay Area — NaNoWriMo headquarters — so offered to volunteer for the organization. They probably thought of me as that crazy older lady who is rather awkward around strangers, but whatever. They were (and are) a great bunch and I met a lot of fun, interesting people.

One such person was Lindsey Grant. Lindsey is the sweetest, most gracious young woman I have ever met. She has said this is due to her Southern upbringing, but I think it’s her nature rather than nurture. I would see Lindsey at official NaNoWriMo events, then later at purely social events, and she would blush at the fact I wrote sexy stories.

Lindsey’s husband Pat works for a large tech company based in the San Francisco Bay Area. About three years ago, Pat transferred to the Zurich office of the company. Now Lindsey, like pretty much everyone who worked at NaNoWriMo, is a writer. Once she moved to Switzerland — a country she knew not much about, where they spoke a language she knew even less about — she began to blog about her move and transitioning to life in a foreign country.

I’ve lived abroad before, so I followed Lindsey’s blog about settling in and navigating a foreign country because it was part connecting with a friend and part connecting with my own memories. Lindsey confronted the basics of everyday life including finding housing with the help of a “relocation specialist”. The specialist found Lindsey and Pat an apartment with a view. I’ll let Lindsey tell the rest of the story:

There is a window across the street from us, directly opposite our dining table, of all places, that happens to be paned with frosted glass. Alas, this frosted glass is not very frosty.
Months ago, when I was getting pleasantly tipsy with our relocation specialist post walk-through, she had her back to this very window while we chatted. At a certain point, I was distracted from what she was saying by a very clear view of a naked man in the apartment opposite. He seemed to be vigorously styling his hair.
“That’s a naked man!” I blurted.
“Where?”
“There!”
“Oh my god, it is! That’s his shower.” She turned and walked straight to the window, while I went the opposite direction, toward my own bathroom, blushing furiously.
“You Americans are so prude!” she laughed. “Look, he’s washing his willy. At least he’s clean.”
I was dying inside.
Since then, as if by clockwork, Pat and I sit down to eat and the bathroom light comes on, the shower commences, and we get what we now affectionately refer to as, “the show.” Poor guy. Poor us!
And he’s not the only one on display. Across from our balcony is yet another building with a poorly frosted window through which we saw another neighbor nakedly doing her laundry.
I suppose it can’t be helped. They may very well know that their windows, like the emperor’s clothing, are doing little to protect their privacy. But I still feel like Rear Window goes Euro. And I just can’t stop blushing.

Anyone who has ever lived in a dense urban setting knows this sort of naked sighting happens all the time. But usually the sighting is not when the naked person is taking a shower. (This makes Zurich sound a lot sexier, doesn’t it?)

So all that was two years ago. Then earlier this year, 2015, the Naughty Literati came up with a vacation-themed anthology. I had a great vacation story already written and submitted to another publisher long ago, but had never heard back from the editor. So I contacted the editor and discovered my (really awesome, I have to admit!) story was accepted but publication was delayed until 2016. Which meant I had to write another story.

Luckily, I keep all my notes and snippets of inspiration in a folder on my computer. That’s when the document called “Zurich” jumped out at me, and thus “Window Display” was born!

There’s a whole other plot line in my story, centered around my heroine Laurie and her academic research. Laurie’s dissertation is about the Roman empress Sabina who was the wife of Hadrian (emperor 117-138 CE). I chose that subject purposely. During my research for my historical erotic romance novel Hadrian and Sabina: A Love Story, I discovered there was not much known about Sabina. (The reasons for this are spelled out in “Window Display” so I won’t go into it here.) Which meant I had a perfectly good never-before-done dissertation topic for my heroine. Plus, I got to add a touch of history to my contemporary story, which, for a historical romance writer, is always welcome.

My excerpt on the Naughty Literati website is my version of the first glimpse of the neighbor nakedly bathing.

Naughty Escapes is now available in ebook (only 99 cents!) and print. There are 11 wonderful stories from which to choose! 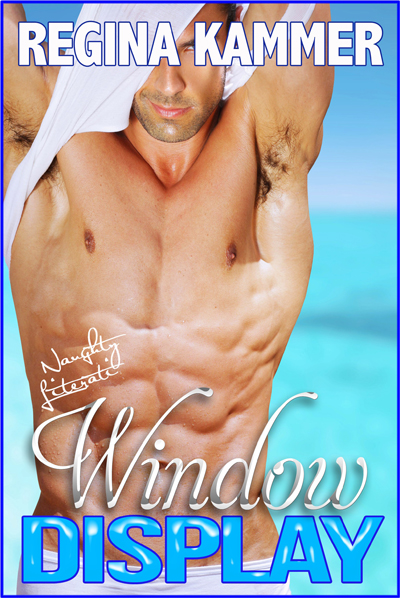